As an Amazon affiliate, we earn from qualifying purchases.

The Weslo Cadence G 5.9 was first released in 2014 and came as an upgrade on the Cadence 5.2 version.

At its price, it is one of the cheapest treadmills in the whole market and is aggressively popular among exercisers both new and experienced by easily being the bestselling treadmill on Amazon.com. 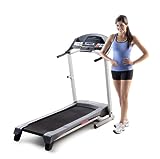 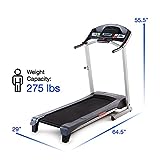 Even for its low price, the treadmill more than makes up with its features. It comes with an adjustable speed dial that can go from 1 mph all the way to 10 mph. The speed can be increased and decreased accordingly by pressing the + and – button on the control panel. For what will be delightful news to users is the fact that the treadmill comes with six loaded workout programs that have been configured according to the training regimes set by physical trainers. Three of those are weight loss workouts while the other three are high intensity workouts. This diversity in training options means that the treadmill in question can cater to almost all of your workout needs. The console of the Weslo Cadence G 5.9 is blue-tinted and displays the speed, elapsed time, distance, and number of calories burnt. One small complaint about the LCD is that the display does not have any backlight, so you’d be hard pressed to know what the readings on the control panel are if you’re operating the treadmill in low lighting. It has to be mentioned though the display is perfectly visible in daylight. The dashboard itself also has two cup-holders and comes with a panel for where you can put a kindle or a book/magazine that you can read upon while walking or jogging on the treadmill.

The Weslo Cadence G 5.9 weighs around 117 pounds and measures 68x31x10, meaning that it is light in weight and even one person won’t take long to be able to set it up. The treadmill is compact and occupies generally very little space which makes it an ideal option to put in your home studio. One question that does however linger in the mind is the questionable length and width of the moving conveyer belt which might prove to be a little narrow and uncomfortable for those with bigger feet. The compact length of the belt also makes it tricky for exercisers to try running over it. Though this may not be a problem for everyone involved, those thinking of buying the treadmill should take a measure of how big their feet are before they do.

The treadmill can also be manually inclined around 10% to 15% in order to increase the slope for the respective workouts but it has to be mentioned that you’d have to get off and manually adjust the incline angle yourself before resuming your workout.

The Weslo Cadence G 5.9 has a motor that operates on 2.25 HP. The conveyer belt is thin and moves over small rollers. The frame of the treadmill is also light and contains plastic parts that aren’t sealed at the joint but that is probably because of the very affordable value though it shouldn’t be a reason for worry because the treadmill is perfectly safe and sturdy to walk on. Surprisingly, even though the motor is small and puts a constrained effort in moving the belt, the noise it makes is very little and hums even lower than a dishwasher.
So before we sign off, let’s look at the pros and cons once more.

With its affordable price, the Weslo Cadence G 5.9 gives almost as many features as a high-end treadmill. Sure, it may be flawed but for what it costs this treadmill more than gives you its money’s worth. No wonder it’s so popular among exercise enthusiasts

Ranks #1 in Amazon's list of most popular treadmills. And for a very viable reason too as it sports a decent amount of preset workouts to spice up your training.

I am a highly competent and enthusiastic Personal Trainer with the ability to help people achieve their fitness goals and ambitions. I have been training for the past five years myself and have gained knowledge and experience within the fitness sector which also included me learning to a high extent about nutrition and supplementation. I learnt this from being practical and additional research in my own time. I am able to apply the knowledge I have to help anyone and work around their needs and goals. I have been around physical activity for all of my teenage and adult life. My career as fitness guide through various Gyms has given me immense knowledge in recommending a variety of fitness equipments.

Back to top button
Close
CONGRATULATIONS!!! You're our 1 millionth visitor Click here to save big at our favorite online store
Close