As an Amazon affiliate, we earn from qualifying purchases.

Are you looking for a reliable exercise bike that is strong and sturdy enough to last you for years? If you are, look no further because the Assault Fitness Airbike may very well be the strongest piece of machinery in the market that can take a beating and yet continue to run as smoothly as ever.

The Assault Fitness Airbike is not only popular amongst home gym enthusiasts but is also used widely by military personnel in their training regime, because of its toughness, affordability, and the fact that any person who buys it is guaranteed that it will be a long-term future investment.

This steel-framed exercise bike from LifeCORE is designed to meet all fitness levels and workout intensities, and is trusted by some of the largest Crossfit gyms, professional athletes and the U.S. Government.

A simplistic machine that uses an assortment of impressive features, the Assault Fitness Airbike is great for toning core muscles and giving a sizeable workout to your lower-body, as well as decent toning to your upper body too. If we have grasped your attention, you should read further to find out why this bike is such spectacular bestseller. 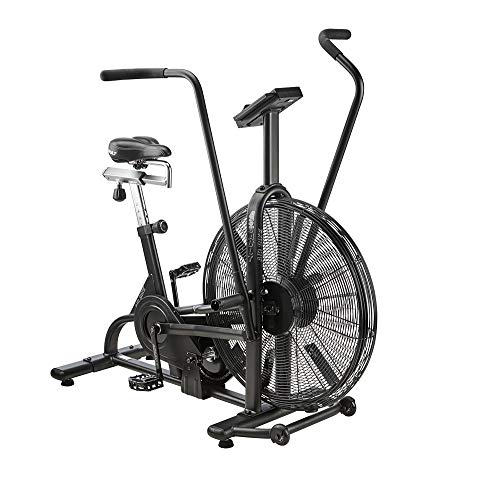 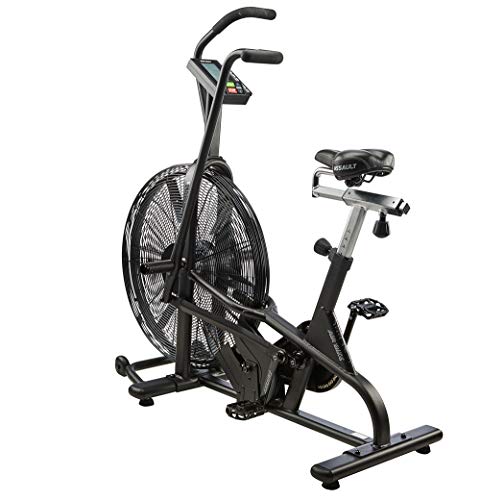 The Assault Fitness Airbike is relatively light and weighs almost 98.1 pounds and can support a maximum capacity of up to 350 pounds. It occupies dimensions of 50.9” x 28.3” x 48.4” of length, width, and height respectively. Transport wheels at the front make it easier to tilt the bike from the back and move it around from one place to another.

As mentioned in the introduction, the bike is impeccably sturdy and can take heavy amount of use. The frame is a solid steel construction and the handlebars are made of 12 gauge steel all of which is coated with high tensile steel that prevents rust.

Twenty sealed ball bearings through the frame, along with pivot points also give a very smooth and durable feel when operating the bike.

The bike comes partly assembled and you will have to assemble the rest of it. Because of the 107 lbs weight of the box, it might be a little tricky as a one-man task but the instructions manual does a good job in assisting users to assemble the bike on their own. A search on Youtube will also unveil helpful videos that highlight on how the assembly is to be done.

The Assault Fitness Airbike features an impressive console that helps you keep track of vital readings such as interval, time, amount of calories burnt, distance, speed, watts, rpm, and heart rate (provided that you have a chest strap on). The display on the console is big enough to display all these readings, although one small complain that can be directed at it is the lack of backlit LED light, which makes it a little hard to make out the readings in low light environments. On the right side of the console you will find 7 keys that help you set up workout programs such as Heart rate, watts, tabata, reverse tabata, intervals etc.

The main selling point, or what could be considered the ‘centerpiece’ of this product, is the spectacular Air Resistance fan. The twenty five inch steel fan is what provides you the resistance for your workout. The harder you pedal, the more air the fan will expel through the tiny slits. The interesting thing is, the more the peddling speed increases, the greater force one will have to apply against the resistance. This is what makes the Airbike such a darn popular machine because it provides, in theory, infinite resistance and those exercisers who are looking to push their limits and exert themselves will benefit immensely from it.

The bike has moving handlebars that will move to and fro as you peddle, giving your arms and upper body a sizeable workout too. This will help build core muscles in your forearms and biceps.

Because the bike is constructed for almost everyone, the seat is very adjustable. Trainees can easily move the seat forward or backwards, and up or down. The saddle is covered in leather and the adjustable angling of it makes it suitable for any person to sit on. Although there are slight complaints that the padding on the seat is a little tough and not too comfortable for sitting for extended periods of time.

The pedals of the bike provide a reasonable grip even though there are no specific straps to place your feet in, nonetheless pedaling will move both the handlebars and the air resistance fan together, as they are all linked together.

With most of the essential features covered, lets weigh the pros and cons of this machine

The Assault Fitness Airbike achieves a lot of things with its simple yet effective design that incorporates the stunning Air Resistance fan and movable handlebars, making it the go-to machine for competitive athletes and the rigorous physical training requirements of the military. A simple word for it would be ‘badass’ as it both looks and feels like a badass machine. In choosing to buy the Assault Fitness Airbike, you will be guaranteeing yourself years of refreshing workouts with a machine that is as reliable as it is strong.

Army training centers and some of the most seasoned athletes use this bike for training.

I am a highly competent and enthusiastic Personal Trainer with the ability to help people achieve their fitness goals and ambitions. I have been training for the past five years myself and have gained knowledge and experience within the fitness sector which also included me learning to a high extent about nutrition and supplementation. I learnt this from being practical and additional research in my own time. I am able to apply the knowledge I have to help anyone and work around their needs and goals. I have been around physical activity for all of my teenage and adult life. My career as fitness guide through various Gyms has given me immense knowledge in recommending a variety of fitness equipments.

Back to top button
Close
CONGRATULATIONS!!! You're our 1 millionth visitor Click here to save big at our favorite online store
Close